Thailand - The Biggest Adventure of My Life (Part 1 - Bangkok)

Our trip to Thailand was something like a very late Honeymoon. As we spent all our holidays from work for the wedding there was no time or money left for relax. :)
So after some time and some "money saving" we made the decision and bought the flight tickets.
We got them from Etihad Airways and they were tickets from Dublin to Abu Dhabi and from Abu Dhabi to Bangkok and BACK of course. Then we bought 2 nights in Bangkok in very cheap hotel but because we weren't planning to spend too much time in there it was completely fine and also we bought the flight from there to Krabi with Thai-airways. And a couple of nights in Emerald gardens there and that was it. :)

We were scared but excited as well and packed our backpacks and were ready to go… to experience some adventure!

10.03.2012
When we were "checking in" here in Dublin Airport there was a Slovak stewardess taking our luggage from us and she gave us a couple of advises and told us how beautiful Thailand was.
It was really good, because at that moment... all the stress and nervousness we were feeling went away  and when we stepped in to the plane of Etihad Airlines we already knew that it was completely different World we were going to.
The plane was the biggest we have ever flown and the plane from Abu Dhabi to Bangkok was even bigger. 10 seats in a row.....WOW!
and stewardesses were so beautiful ... all of them. They were wearing those beautiful hats with something like a little wale on the side of their faces. It was making them even more beautiful.
There were a little screens in front of everybody's seat so we could have watched the movie we wanted or some series or play some simple games. :) 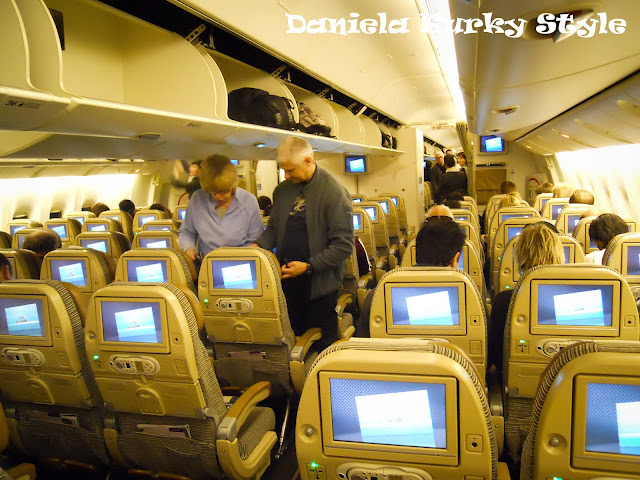 So I have finally seen A New Years Eve movie during the flight
and the new movie with Justin Timberlake - In Time
It was really good. I was actually surprised that singer can be such a good actor.
Well done Justin! :)

I was  a little bit worried about VISAS as we had nothing ready before our flight only some form which we downloaded from Web and couple of Passport size photos which were horrible and thankfully we never needed to use but at the end.... we just filled a little slip of paper in our plane with details and that was everything. ;)

11.03.2012
We arrived to Bangkok at 7 am what was like midnight in Dublin so we were very tired. Taxi to hotel cost us 450BHT/11.20E but it was over an hour drive.  The hotel wasn't anything extra but when I think of the fact that it was 15 Euro two nights for both of us... :) What would you expect for 3 Euro a night, right?
However we tried we weren't able to stay awake and slept until 1 pm. We organized "City tour" for 2 pm. We thought we would be collected by some big bus with other 40 tourists but it was a car only with guider and driver. We paid 16 Euro for this and they were with us for 4 hours.
We were just wondering how much this Thai girl would earn when it was 16 Euro for 2 people and petrol..... Like a euro per hour? We really didn't know. So she brought us to see all temples and interesting places in Bangkok and we were blessed by monk in one of those temples and got a special bracelet for good luck.
It was very nice feeling... 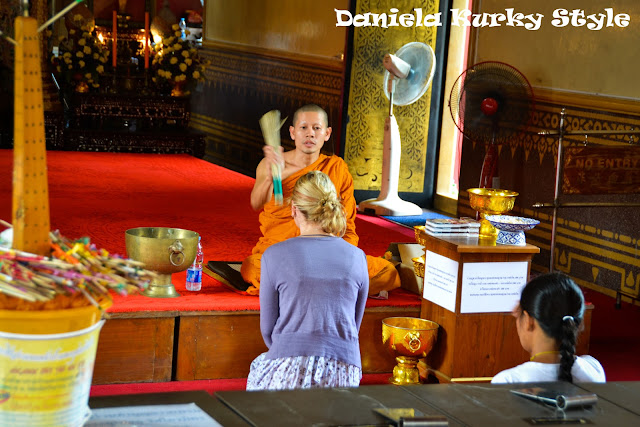 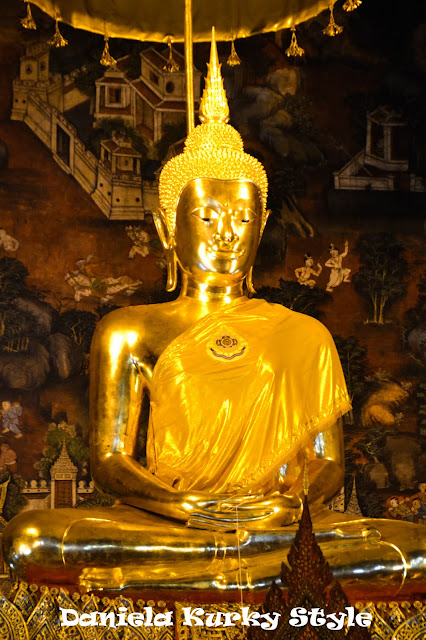 The poverty was visible the most around the river. When we went for the "boat ride" the girl told us that all of those poor houses were gone during the flooding last year. 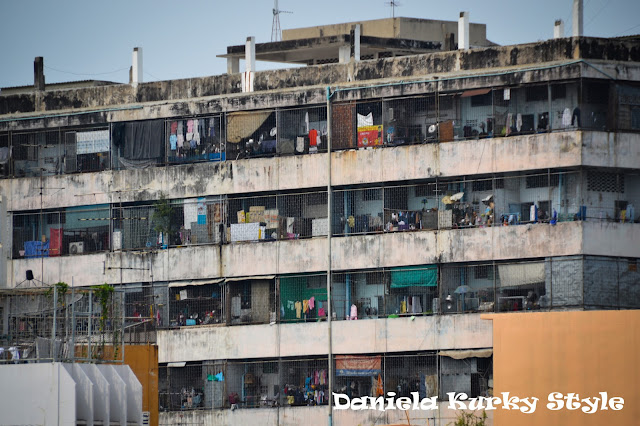 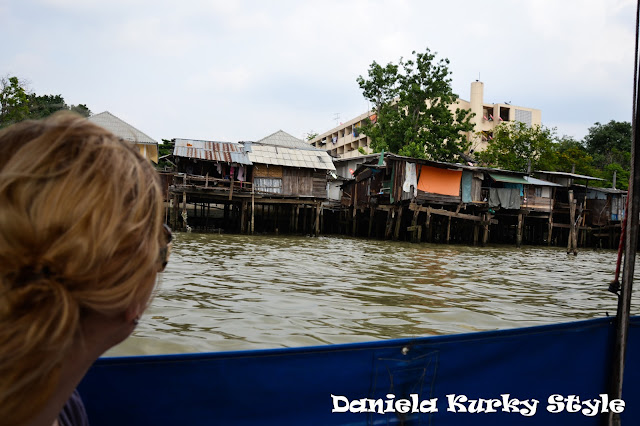 But I have to get back to driving.....  NO seat belts in use. NO side indicators in use. NO helmets in use... All families on one scooter with no problem and there is only one main rule: bigger vehicle goes first! :D :D :D But it is nothing to compare with Tuk-tuk ride.
The key is that you always have to bargain. It was GREAT FUN! But anyway.....on our way home after dinner and a bit of a shopping (of course   - first scarf purchased   and a laptop bag in shape of radio from 40's..... Awesome!) we took Air train (something like underground but on the ground. :D :D :D It was very cold in there because of air conditioning. I was actually putting my jumper on every-time I was stepping it to the building instead of outside) we took Tuk-tuk. We thought it was our last drive of our lives and  we would die.... ....no rules at all and there was a couple of minutes when the driver was driving one way route but IN A WRONG WAY!...  (but what would you expect for 2 Euro....right? ) :D :D :D 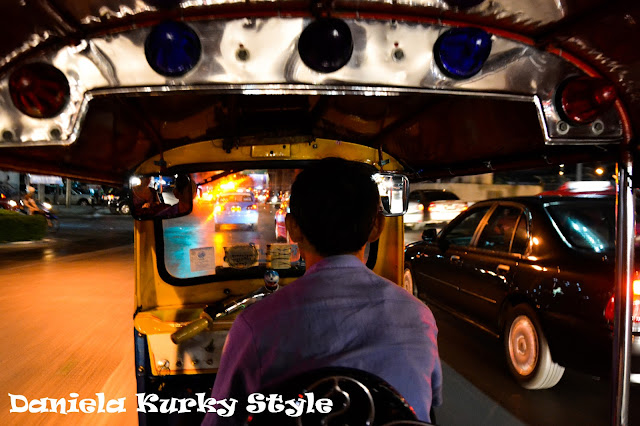 12.03.2012
OK, The second day in Bangkok.
We already had to reconcile the fact that dogs and cats would be everywhere (just later we found out that they catch the snakes and that is the reason why they just have such a respect of people) 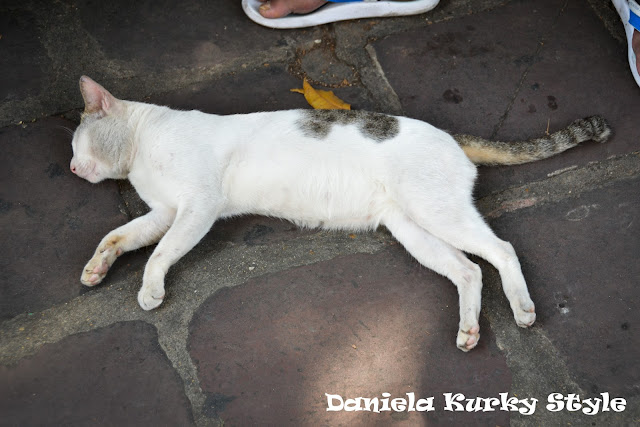 And we also noticed that there is something like clocks on big traffic lights counting down the seconds. It shows for how long you have to wait or how long is your "green" going to stay there.
I guess they were made for Bangkok drivers to make them to be at least a bit patient and actually follow the signs! :D :D :D
That day we started with floating market which was amazing! 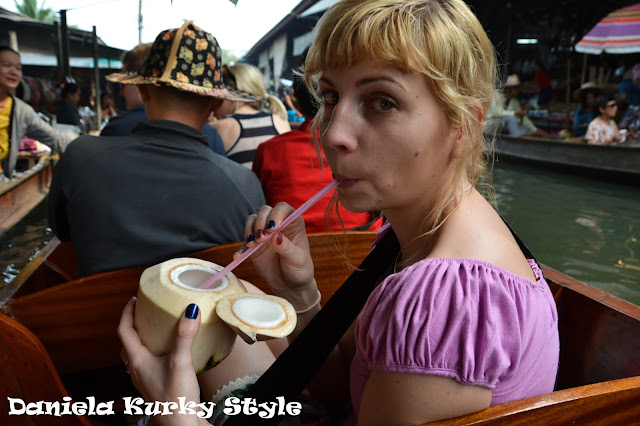 All families had their boats there with everything.... food, clothes; souvenirs....fruits.... anything.... we even got ourselves in to the "boat jam"   and couldn't move for 20 minutes.... 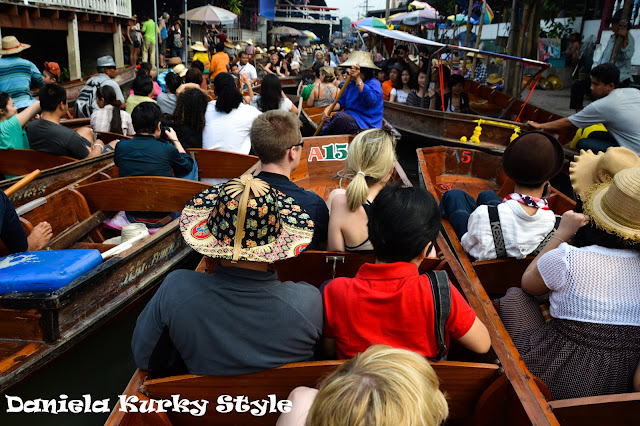 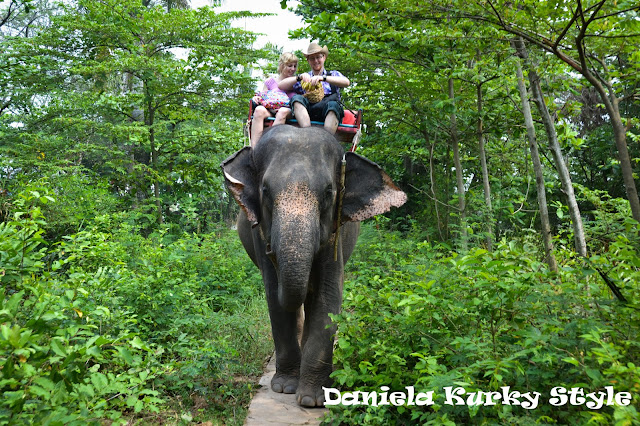 Then we saw a small shows with snakes and crocodiles which were pretty scary.... and then performance of Thai dance...And that was more my cup of a tea ....of course. :) 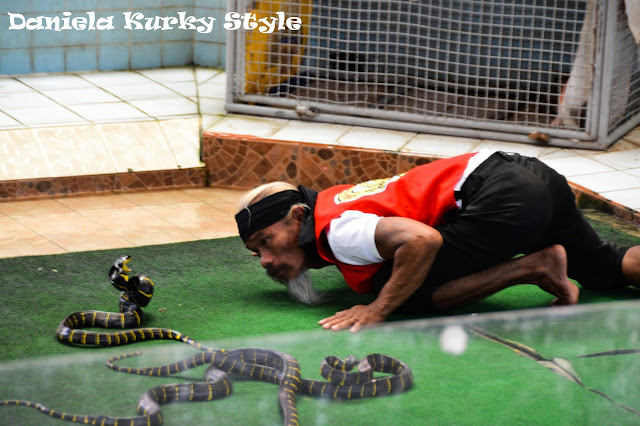 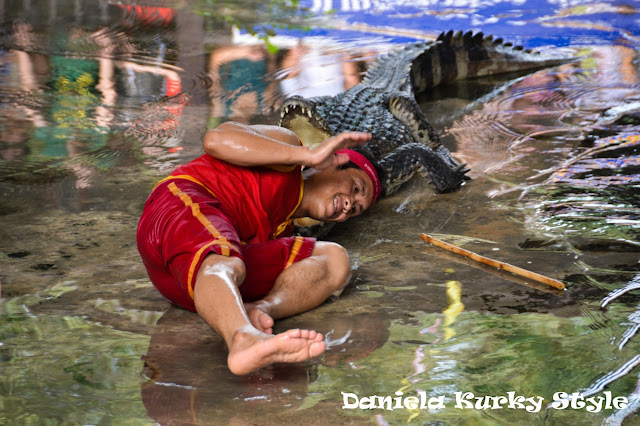 Today's News: There is an incredible respect to Royal Family and to the monks. Monks even have a special place where they eat in restaurants.
People use fork and spoon instead of knife and fork.
Thai people don't like the Sun, however hot they are they always wear long sleeves and long trousers. They don't like to be dark or tanned, so instead of tanning products they have whitening products in pharmacies. :D
And....... The first mosquito bite.  (now I just need to wait 10 days to find out whether I got malaria.... :D :D :D )

13.03.2012
We had a couple of hours before we had to get our flight to Krabi so we decided to have a walk around the area where our hotel was. And as we were looking in to the map on one of the corners a gentleman started to talk to us.
It was actually a policeman having a day off and told us where to walk to see something nice and advised one tourist agency where we went and booked the rest of our holidays with all transports.
Then we took the TukTuk for the last time and went to the airport by taxi. (400BHT/10E)....

Read in Your Language 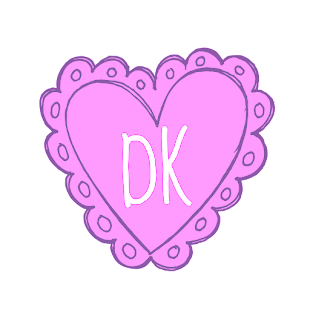 Hey Everyone!
Welcome to my colorful world!
My name is Daniela and I hope you will have a bit of fun and find some inspiration here.
I am a girl living "double life" in two countries so I will try to write this blog in two languages... :) :) :)
Even if Ireland became my second home I did not forget where I came from and I love Slovakia more than anything else. :)